Envy Smile Dental Spa provides cosmetic dentistry for many high-profile clients, including celebrities and public figures, who require meticulous, excellent dentistry because of their visible and recognizable positions. Even if you are not a celebrity you certainly will be treated like one! 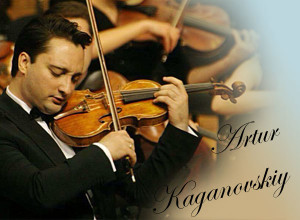 Artur Kaganovskiy, the violinist, was born in Moscow, Russia, in 1986, started to play the violin at age three. With guidance from the famed Isaac Stern, he quickly established himself, as a leading personality in the violin world.  Artur made his Carnegie Hall debut, performing Elgar’s Violin Concerto at the Stern Auditorium in 2007. Besides his extensive international performing concert career, Mr. Kaganovskiy is Faculty on the Else Borges Foundation and Arts Initiatives Music Festival in Harrisburg, PA and holds one of the finest private teaching studios in Brooklyn.

Galit Chait is an Israeli former competitive ice dancer. She and her partner Sergei Sakhnovski competed internationally for Israel from 1995 to 2006, becoming the 2002 World bronze medalists. After her retirement as a competitive skater, Chait began coaching ice dancing. She was the head coach of the Israeli brother-and-sister team Alexandra Zaretsky and Roman Zaretsky, as well as Tamar Katz.

Sergei Sakhnovski is an Israeli ice dancer. With partner Galit Chait, he is the 2002 World bronze medalist for Israel. With the previous partner Ekaterina Svirina, he is the 1993 World Junior champion for Russia. They competed in three Olympics, finishing 14th in 1998, 6th in 2002, and 8th in 2006. Their coaches included Natalia Dubova, Tatiana Tarasova, Evgeni Platov, Natalia Linichuk and Gennadi Karponosov.

Nesya Serebro. My dance coaches helped to make me the top USA National Youth Latin champion, representing the United States of America at 3 consecutive Junior and Youth Latin World championships, and in International Opens as far as China and as close as Canada. In everyday life, our smiles give us a first impression. To get that lovely smile I went to Dr. Weiner, my smile helped me give a great first impression on the way to becoming a champion, so go to Dr. Weiner for the smile of the champion! – Nessya

Nicole Blythe is a young, promising actress who has already been seen with Chris Rock in “I Was Made to Love Her,” Wesley Snipes in “Disappearing Acts,” HBO’s “Girlfriend,” “History of Hip-Hop” with Curtis Blow and HBO’s “Sex and the City.”

Roger Hanson, Entertainment Professional, was born in 1987 in Brooklyn. He hosted live shows and a cooking show video series with puppets, Similar to Sesame Street.

Ethan Khusidman was born in 2002 in Brooklyn. He loves to sing, play piano and bass guitar. You may have seen him playing 6 roles on Broadway shows – as a boy Usher and young Charlie Chaplin in Chaplin (2012), Young Shlomo and Young Eli Chaim in Soul Doctor (2013) and as Mason and Lawrence in School of Rock by Andrew Lloyd Webber (2015). On screen, he’s been featured in Adam Sandler’s The Cobbler (2014), Dark Was the Nighr (2014) and Making Friends (2011). As a young piano player, he won the National Young Maestro piano competition.

Jessica Livianu, ITS Tennis Juniors Player, was born in 1998 in Brooklyn. She started playing tennis at the age of four when her mother, Bogdana Romansky-Livianu, a former WTA player from Bulgaria, introduced her to tennis. To this day, Livianu’s mother is still her coach, and she won’t have to travel far to watch her daughter compete for St. John’s University next season.

We welcome any questions that you may have. Email or call us to schedule a consultation and take the first step to enjoying the confidence a great smile brings. For more information or to schedule a consultation with the best in class celebrity cosmetic dentist please feel free to contact us:
Envy Smile Dental Spa
1738 East 13th Street
Brooklyn, NY 11229
(718) 891-0606

OR
Ask Dr. Marianna Weiner
EnvySmile cosmetic dentistry is one-stop dental practice for all of your oral health needs
Recognitions and Memberships